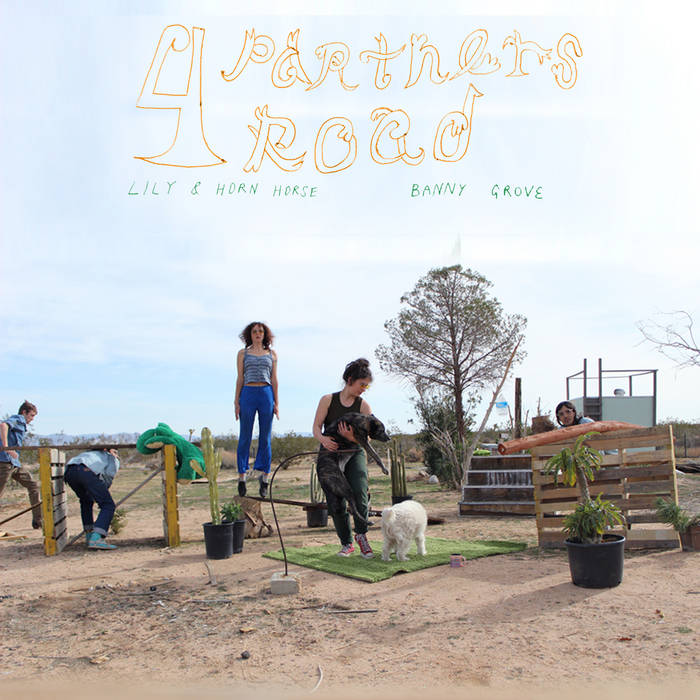 Historically, the split album has been a way for independent artists (and the labels that represent them) to share the burdens of production while sonically bolstering each other’s work. The reasons for a couple of punks to split a vinyl record are almost self-evident given the binary nature of the medium and its high cost of production. Such considerations are not entirely beside the point in the digital age, but the traditional half-and-half form of the split is almost arbitrated by our adapted listening habits (not to mention the can of worms that may come with rights to hosting, streaming, and direction of online traffic). It only seems inevitable then that those working at the fore of the new underground would modify the form inventively. 4 partners road is one such mutation.

The album volleys between the regal dreamstates of Lily and Horn Horse and zany episodes by Banny Grove. Each duo presents their own singular take on art pop. The resulting dialogue is confounding but exciting. Iconically absurd outbursts by dadaist diva Banny Grove soften the dry, mechanical precision that lends Lily and Horn Horse their sheen. Conversely, the bubblegum sensibilities of the latter bring out some of Grove and Co.’s tastiest work to date. 4 partners road is a whirlwind of an album birthed out of the closest of friendships. True affinity sits between these partners.

Banny Grove, the pop icon persona of Louise Chicoine, sits at the crossroads of Kate Bush, Hannah Montana, and Pee-Wee Herman. She lives in a material world, a Southern California doll house from which she comments upon the maladies–minor and grand–of the modern world. The work she puts forward with bandmate (and Nicey Music co-founder) Peter Nichols (a.k.a. Grape Room) reads at times like an American DIY response to PC Music: artificial and off-kilter but makeshift, approachable. Here, Grove takes her vocal performance to commendable new heights. The operatic soaring that punctuates her first contribution to the album, “So Happy So Good,” is a masterclass in how to make an entrance (Klaus Nomi anyone?). And little sums up Banny Grove’s disposition better than the melodramatic, tragic despair with which she delivers the condemnation, “I gave a damn for you/ Mr. Romeo,” atop a sugary ball pit soundtrack of an instrumental. One forgets that such sentiments aren’t typically expressed by the same voice that, only tracks earlier (and with equal lack of composure) boasted, “I feel so happy, I feel so good/ I want to tell the whole neighborhood.” Banny’s back and she’s got plenty to say.

Perhaps more centered in their expression (if all the more strange for it), Lily and Horn Horse hail from upstate New York. The still-young duo of Lily Konigsberg and Matt Norman unleashed their layered, expressive, mutant pop upon the world with their 2017 debut Lily On Horn Horse. Having sowed the seed for collaboration, they followed it up that same year with Next To Me, a perfectly distilled statement of their sound. Cruising through 19 tracks in 25 minutes, Next To Me was an accelerated take on the contemporary state of pop by a duo with equal admiration for both Herbie Hancock and Liz Phair. The duo’s contributions to 4 partners road are atmospheric and catchy, grooving yet mellow. Konigsberg and Norman sing with a calm demeanor, understating their more absurd lyrics, ones that might be just as comfortable on Banny tracks (“I went to school/ And then I bought a car”).

As a studied fan of both artists, I can’t help but hear each duo’s influence on the other, even if the resulting “sides” feel so distinct. It’s the sort of resonance between artists that comes from friendship and the exchange that occurs when you tirelessly share show bill after show bill at small venues across the USA. These groups recognized their affinity and managed to move ever-so-slightly nearer. Positive actual joy.