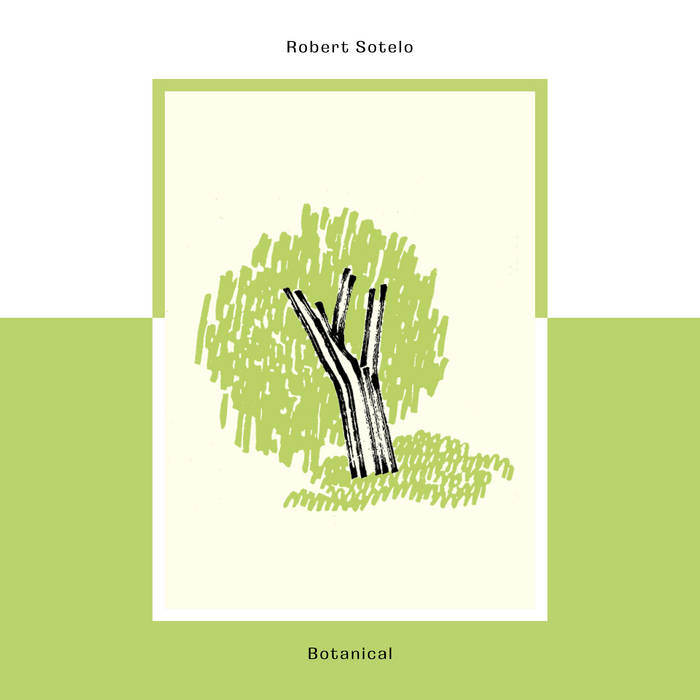 It took a very special album to convince us at Nicey Music to extend our reach all the way across the Atlantic for our very first international release, but the home-recorded songs of Glasgow-based artist Robert Sotelo are just too curious and charming to ignore. With it’s rhythmic oddities, it’s comically minimal counterpoints, and it’s nakedly low-budget sound-palette, BOTANICAL forms a mesmerizing melodic universe, through which Sotelo’s calm musings wander like a kid with a butterfly net. It’s a supremely modest album, and at the same time, a timeless masterpiece that everyone should experience.

Unable to perform any investigation of our own from all the way over here, we rely on this third-person transmission from Mr. Sotelo himself for the backstory:

“Recorded in his final weeks as a resident of London 2017, BOTANICAL by Robert Sotelo acts as a true summation.

Sotelo and his partner took to the canal ways and greenery zones of the Capital and retraced his steps, cataloging forgotten rooms, objects of note and the items acquired.

Negotiating the purchase of a Yamaha PSS 680 at a Manor House based Charity Store he then hit upon the idea of forging a ‘Message to the Future’. Something to be found again later, when everything else is forgotten.

The flat they were leaving became ever barren by the day and under the expert influence of Laurie Anderson, The Buggles, Mort Garson, Telex and John Bender, experiments with this new instrument galvanised into fractured structures, rhythmic anomalies and playful near-absurdist melodies, until a strange re-enactment occurred:

BOTANICAL replaced the furniture with a biosphere of music. Ideas that (however naive) fantasised and frolicked with the changing space around it, projecting a spectrum of memory, happiness and recognition deep into the subsiding foundations.

Imagine the living room as tropical Jetty off which they could travel up-river. The stacks of boxes and laundry bags a disassembly and new arrangement of life.The wild feral cats of the Palermo Botanical Gardens nullified in deep humidity, their purring entangled with bird song as the dawn approached.

Alone at home for days, Sotelo prepared food, visited a reservoir, a motorway, took out the bins, completing each task as he always did.

Soon he delivered the compositions to recording engineer John Hannon, to reproduce the results professionally. Hannon edited, mixed, mastered. Finally completed onsite at ‘NO Recording Studio’, the contemporary Farm setting and Essex countryside provided a fitting epilogue to the process.

A step away from Robert Sotelo’s previous CUSP album for Upset the Rhythm (itself a resolution of sorts), BOTANICAL is keyboard based, percussively eccentric plus highly unsure of itself and it’s attempt at pop music.

Upon it’s discovery far into the future, Robert hopes that the life they left behind together remains embedded in it’s sound, a coded celebration of time and it’s masterful sway.”

Recorded, mixed, and mastered by John Hannon
Saxophone on 3,4,7, and 8 by Ian McCall
Design by Mathew Walkerdine